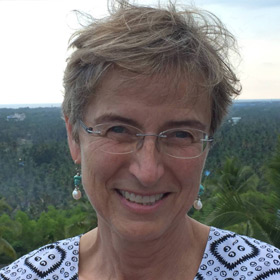 Marianne Murray (module facilitator) has a Ph.D in Transformative Learning and Change in Human Systems, and an MA in Transpersonal Psychology. She is on the faculty of the Academy for the Love of Learning in Santa Fe, New Mexico, where she co-facilitates Leading by Being, a multi-year Personal Leadership training program, as well as other workshops and trainings based in an experiential and integrative approach to adult learning. She also incorporates the view and practice of Systemic Constellations into her work.

After the pivotal experience of her first Holotropic Breathwork workshop in 1990, Marianne has been actively involved ever since. She was certified as a facilitator in 2001 and began offering workshops in the UK in 2004. Since then she has become part of the GTT facilitation team, working in England, Ukraine, the USA, and elsewhere when the opportunity arises. Now basing herself in her native England, Marianne’s focus is supporting the emergence of the Holotropic perspective – and Holotropic Breathwork as a transformative practice –in various sectors including mental health, social change leadership, and education. She is also developing a small psychotherapy practice, and exploring various forms of individual and group process that support ongoing learning and change following deep experiential work.